Fragment of Flag that Nelson flew at Trafalgar Sold for 300,000 Pounds

Earlier this week, a piece of the Union Jack flag was sold in Auction in London for a whopping 297,000 pounds. The flag belonged to Britain’s Lord Horatio Nelson, and it was the flag that he reportedly flew on his ship on the Battle of Trafalgar. The flag was part of the collection of Nelson memorabilia that was put up for sale at the famous auction house Sotheby’s. 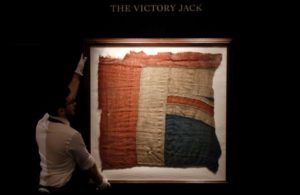 Among the items of Nelson that was put up for sale included his weapons, his “grog chest”, and some personal letters. The most expensive item sold at the auction was a portrait of Nelson’s mistress, Emma Hamilton. It sold for 369,000 pounds, which was higher than the estimated price of only 150-200 thousand pounds. 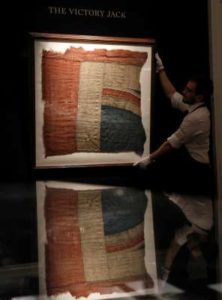 The flag fragment was measured to be 86 cm by 92 cm flag or 34 inches by 36 inches. It was also dubbed “The Victory Jack”. The flag also exceeded its estimate, as it was valued at only 80,000 to 100,000 pounds prior to the auction. The last surviving complete Union Jack flag that was flown at battle was sold for 384,000 pounds in 2009. The battle of Trafalgar was a naval clash that took place in 1805 between the British and the French and Spanish fleet. Nelson was fatally wounded in the battle, but had won against all odds.

“The flag has a wonderful story,” said Gabriel Heaton, specialist for books and manuscripts at Sotheby’s, “It was used as part of the great ceremonial funeral of Nelson after his death at the battle. And pieces of it were broken up and kept by the loyal sailors who had lost their very, very deeply loved commander.”