Coldest Village on Earth has Temperatures of -88 Degrees F

The village of Omymyakon is located in a remote outpost in Siberia. It is known as the coldest village on Earth. In this small town, eyelashes freeze, frostbite is a real and constant danger, and cars have to be kept running even when not being used. The temperatures in this tiny village can reach up to -90 degrees Fahrenheit. In 2013, the village recorded lowest temperature ever for a populated town, with the temperatures reaching -98 degrees F. 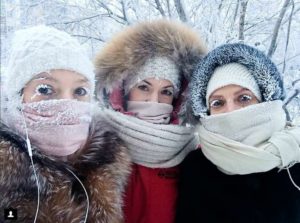 The village of Oymyakon is a settlement of around 500 people in the Yakutia region of Russia. The town recorded the official lowest temperature this year at -74 degrees. Although the newest digital thermometer installed broke earlier week as it measured a freezing new record of -80 degrees. According to the Siberian Times, some of the residents’ own measurements has shown the temperature go even as low as -88 degrees. 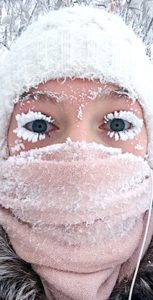 The town is dark for 21 hours of the day and it is the closest town to the Arctic Circle, which is only 500 miles away. The town has been the subject of several viral videos and articles because of its reputation for the coldest place on earth. Residents of the town have said that they are used to the cold as they withstand it year after year. To reach the city, tourists will have to travel 7 hours by plane from Moscow, which is 3,300 miles away. Then they have to drive two days before reaching Oymyakon.

“Yakutians love the cold food, the frozen raw Arctic fish, white salmon, whitefish, frozen raw horse liver, but they are considered to be delicacies,” said local Bolot Bochkarev, “In daily life, we like eating the soup with meat. The meat is a must. It helps our health much.”