Earlier this week, a video went viral of how a 500,000 pound humpback whale protected a diver from a shark. The video was of a marine biologist named Nan Hauser. Hauser was examining a whale off of the coast of Muri Beach, in Ratonga, Cook Islands. According to Hauser, the whale just started to act differently, and although she didn’t know it at the time, the whale ended up saving his life. 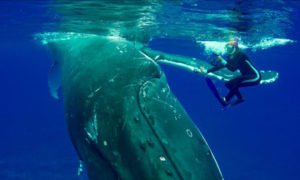 The humpback whale was swimming beside Hauser when it suddenly started to push her with its head and mouth. Hauser, who was in a diving suit, wasn’t being harmed but she felt awkward. It turns out that the whale was trying to steer her away from a 15-foot tiger shark that appeared nearby. The footage captured shows Hauser coming to the surface of the water and shouting that there was a shark nearby. Not seen in the video was another whale slapping its tail and keeping the shark away from Hauser. Hauser returned to the boat, and the whale even surfaced from the water to make sure that she was okay. 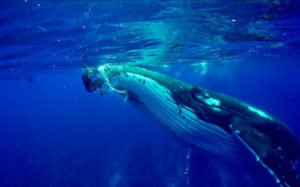 “I wasn’t sure what the whale was up to when he approached me, and it didn’t stop pushing me around for over 10 minutes. It seemed like hours,” Hauser said. “I’ve spent 28 years underwater with whales, and have never had a whale so tactile and so insistent on putting me on his head, or belly, or back, or, most of all, trying to tuck me under his huge pectoral fin. It’s funny how the tables are turned here: I’ve spent the past 28 years protecting whales, and in the moment, I didn’t even realize that they were protecting me!”