Florida Mascot His Uses Head to Save Little Boy

It was a normal afternoon baseball game for the University of Florida Gators. Their mascot, Albert E. Gator, was also enjoying the game. Then he noticed that a foul ball was flying in his direction in the seats. After looking around, he noticed that a boy was not paying attention to the game. Heroically, Albert placed his cushioned hands around the boy’s head. Funnily enough, the foul ball hit Albert squarely on his mascot head.

Poor Albert then (exaggerating, of course) fell on his bottom, where he had to take a few moments to shake of the hit. He even had to take time to lie down and recuperate from such a hit. The little boy that Al protected was mildly surprised when a game ball suddenly fell to his lap. He looked around and saw that the mascot had “lost consciousness” and he then approached the mascot and tried to help him recover by administering CPR, much to the delight of announcers that were calling the game. A video of the entire scene has since gone viral on the internet. 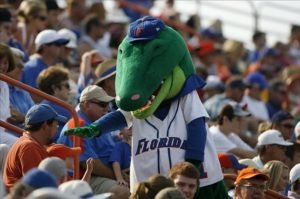 Albert, or Al for short, has been the school mascot since 1911. He was named after Albert Murphee, who was the second president of the school. Coincidentally, Al E. Gator, is one of the most recognizable mascots in the state. Reports have said that Al was able to learn a lot from the entire experience, and that he is recovering quite well from the hit that he took for the boy.