Flooded Train Station is Turned into a Swimming Pool

In Sweden, a train station was flooded after a heavy storm rained down heavy waters in the region. But instead of shutting down the station completely, the locals have decided to make it a makeshift swimming pool. Some of the locals have even posted pictures of the themselves enjoying the station’s pool, and some have even posed in bathing suits and inflatable devices. 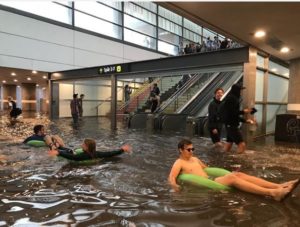 According to the local news, most of the people swimming in the makeshift swimming pool were commuters who tried to make their way home through the flood waters but decided to go for a swim instead. But while it was fun turning the station into a local water park, it had to end eventually. The pictures went viral on social media and pretty soon, the local government sent in work to be done at the train station. 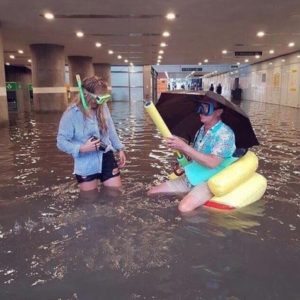 The local government sent in emergency services, who then proceeded to pump the water out of the station. Within a day, the station was dry, and the life of the local commuters returned to normal. Most people who saw the pictures of social media actually questioned the safety of having a flooded train station. Some commented that the bathers at the station could be at risk of disease or being electrocuted. But for the most part, people found the “bathers” and their pictures to be hilarious.

Some parts of the world have been experiencing heavy rains in contrast to the heat wave and droughts being experienced in the other parts of the globe. Flash floods and wildfires are to be expected in these areas.