A group of five friends went on vacation together after their high school graduation in Santa Barbara, California. In their trip, they took a picture together as a memento of the time that they spent together as teenagers. It was also a summer that they would never forget, as each of them would then leave to lead separate lives. Little did they know that that small photo would be the start of a tradition that would last for more than 30 years. 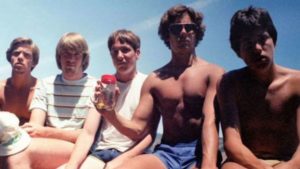 In the original picture, the five friends sat along a fence and posed for a a picture. In the photo, one of them is awkwardly holding a jar, and another with a bucket on his knee. This pose would serve as a blueprint for each picture that they would recreate with each reunion. Every time these five friends would have a reunion after five years, they made sure that they would have a picture that looked exactly like the first one they took in 1982, complete with the jar in hand and the bucket at the knee.

As the years went on, so did their hairstyles and fashion sense. But each time they would reunite at the campsite in northern California, they would recreate the original photo. In an interview that was held earlier this week, they were asked about their famed picture. They were asked why they had such somber expressions on their faces, and one of them replied that they were trying to look “cool”. This year marks the 35th year that they would reunite as friends on the same camp grounds.