Recently, a driver of a minivan sped off the road and plunged into the Indian River in Florida. But thanks to the help of some nearby Good Samaritans, tragedy was averted and a life was saved. According to the Florida Highway Patrol, the vehicle, a Nissan Quest minivan, was traveling at high speeds on a road next to the bridge when it flew off the roadÂ and crashed into the water. The entire minivan was submerged in water. 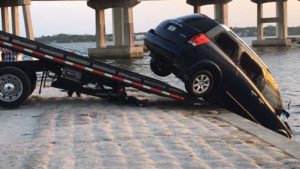 Fortunately, located nearby was Frankie Maldonado, who was fishing and standing next to the river when the car plunged into it. According to Maldonado, he also witnessed the car accelerate as it approached the river. Another bystander by the name of Philipp Mehlenbacher, was in the area when the car raced towards the water. Both men striped down to their underwear and dove into the water to rescue the driver. A nearby boater also helped by providing the swimmers with an anchor. Mehlenbacher used the anchor to smash the windshield and get to the driver in the car. 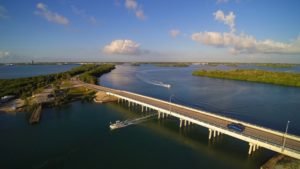 According to both the rescuers, the driver was fighting against his own rescue. “He was fighting with us the whole time,” Mehlenbacher said. “The van was literally underwater when I felt him trying to struggle. I grabbed him by the shoulder and pulled him out.” Luckily, both the swimmers were able to get the driver out before he drowned. According to the swimmers who witnessed the speeding car, the act was definitely not an accident. The identity of the driver is yet to be revealed.