Earlier this week, the very first hybrid of a whale and a dolphin in the wild was spotted by scientists near Hawaii. The animal is a hybrid between a melon-headed whale and a rough-toothed dolphin. The male “wholphin” is believed to be close to adult age, and it was spotted swimming with other dolphins near the island of Kauai last year. The hybrid was spotted by Dr. Robin Baird, a marine biologist that headed the expedition from the Cascadia Research Collective. 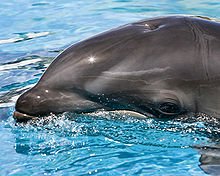 The scientists on the expedition said that the hybrid dolphin immediately caught their attention because of the animal’s unusual appearance. Hybrids with dolphins are very rare, with only three being officially confirmed. But this is the first hybrid between these two species. Melon-headed whales are actually dolphins that belong to the family Delphinidae.

Hybrids have been seen before, but they have only been seen in captivity, and only a few have gone to thrive and reproduce. Scientists are also very reluctant to use the word “wholphin” because of the species involved being so close together and because the species has no widespread hybridization.Â  Hybrids only usually occur when there is a decline in the population in of the parental species. 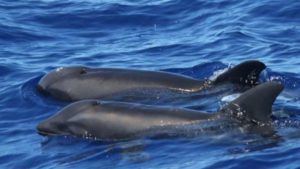 “Calling it something like a wholphin doesn’t make any sense. I think calling it a wholphin just confuses the situation more than it already is.” said Dr. Baird. The term “wholphin” was first used in 1985 at the Sea Life Park in Hawaii. The first hybrid was between a false killer whale and an Atlantic bottle-nosed dolphin. The hybrid was named Kekeaimalu and currently still lives at the marine mammal park, where she helps in teaching children about genetics.