Earlier this week, the first passenger plane touched down on the St Helena airport, also dubbed as “the world’s most useless airport”. After more than 10 years of construction, the airport on the island of St Helena was completed and opened earlier this year. The airport cost more than £250 million to complete. The inaugural flight that landed on the airport had 60 passengers and was coming from a long journey across the Atlantic Ocean. 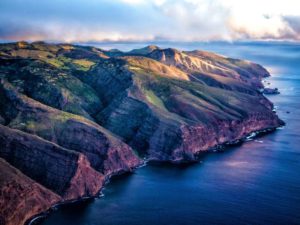 It used to be that the only way to reach the island was through a royal mail ship. But since there was construction work on the port, only a flight was possible. The airport was first announced in 2005, but after years of negotiations by the Coalition, construction only began in 2011. There have been several postponements, including construction delays due to the nasty wind shears that occur on the island. Although the airport functional now, it is also one of the government’s most expensive endeavors, with a per capita cost basis of more than £60,000 for each person in the tiny territory.

The opening of the airport has also had repeated delays because of the difficulty in landing airplane on St Helena. On the island, wind speeds can change dramatically and suddenly, making it a very hazardous approach for most airplanes. That danger, the port access, and the seclusion of the island is why most people dubbed the airport as one of the most useless in the world. It was meant to open last year, but there were more postponements that delayed its opening. St Helena is probably best known as the island that Napoleon was exiled to when he was defeated at Waterloo.