The events of September 11, 2001 will forever be remembered for the terrorist acts that occurred in New York City. While most remember the plane crashes and the victims of that day, there are also those that choose to remember the brave men and women that risked their lives to save as many as possible during the tragic events. Among these heroes include the firefighters that climbed the stairs of the World Trade Center buildings to evacuate everyone to safety. 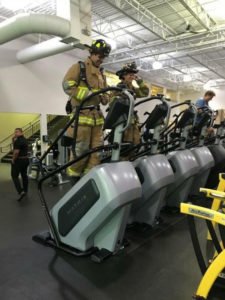 Firefighters from across the nation decided to honor these fallen heroes by climbing 110 flights of stairs. This is in reference to the stairs that the firefighters had to climb that day. The elevators at the World Trade Center did not work at the time and rescue workers had to use the staircases to get to all the people on the higher floors. There were approximately 2,000 steps in the 110 flights of stairs on each building. 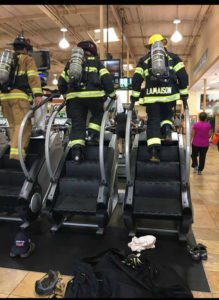 Firefighters from all over the country honored this act by taking 110 flights of stairs in local gyms, usually using stairmaster exercise machine. Anyone who has ever used these machines knows how hard it is to complete 2,000 steps. But these firefighters decided to complete the feat in full firefighter gear, just like their brothers on that fateful day. Full firefighter gear includes heavy fire resistant suit of pants and a jacket, plus a helmet and a full oxygen tank on their backs. The gear itself weighs a minimum of 45 pounds, while the tank weighs an additional 50 pounds.