Over the past few years we’ve seen some grand gender reveals on social media. Some have involved sporting events, flash mobs, and even the use of beloved pets. But this latest gender reveal will have to be the biggest as it involved a hundred foot Ferris wheel. Matt Ostergaard and Adriana Zbik already knew they were going to have a daughter, but Ostergaard wanted the reveal to their friends and families to be a special event. Zbik had a hard time during her pregnancy. They were actually expecting twins but they lost one of the babies. 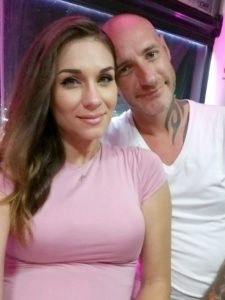 “It was really hard losing the one baby,” Zbik said. “There was a high percentage something like that would happen, but you don’t think it could happen to you. When it does, it’s hard to take your mind over it, even with one blessing coming.” So Ostergaard set out to make sure that this gender reveal would be special and put a smile on his fiancÃ©’s face. 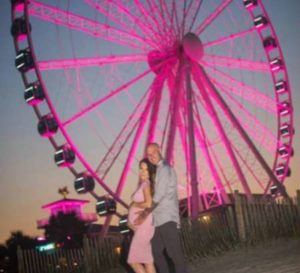 When the couple went to their home in Myrtle Beach, South Carolina, Ostergaard took everyone to see the local fair. It was there that he made his grand gender reveal by lighting up the SkyWheel, a 187-foot Ferris Wheel. The giant ride was lit entirely in pink lights. Ostergaard said that he spoke to the staff earlier in the day and they said that they were more than happy to help out. It took a million LED lights to bathe the entire ride in pink lights.

“It was breathtaking,” Zbik said. “It was a lovely moment. I couldn’t believe this was happening to us. Good things do happen. Not every day is going to be perfect, but there are special moments.”