Father and Son Graduate from University Together

Earlier this week, a father and his son graduated from a University in New Jersey, becoming the first members of their family to earn college degrees. Benjamin Jeanty, along with his father, Duvinson Jeanty each graduated with a degree from William Paterson University. Both men participated in the commencement ceremony, and celebrated together as they moved their tassels and tossed their hats in the graduation festivities. 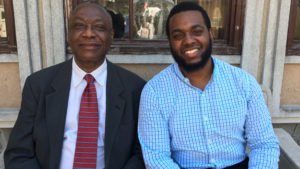 The 27-year old Benjamin was a senior in high school when his father decided to go to college. His father Duvison was 53-years old at the time and wanted to make himself better with the time he had left. Duvinson was a Haitian immigrant and worked as a bus driver for the New Jersey Transit for 27 years. He had retired in 2015, but he still wanted to be productive. After graduating high school, Benjamin attendedÂ Rutgers University before deciding to work instead after only a year. He said his father enrolling in college served as inspiration for him to go back and earn a degree. 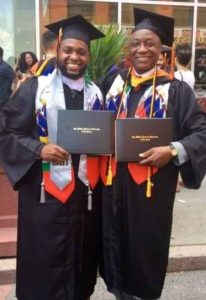 “It was amazing,” said Benjamin, “Never in a million years did I ever dream of going to school with my father. He gave us the example that we should always look to better ourselves.” Ben finished with a degree in psychology while his father finished with a degree in finance. After graduation, Benjamin will be teaching at a special needs school, and Duvinson will be looking to continue his studies and get his masters degree in finance. He plans to use what he has learned to run a real estate company he started.