Earlier this week, a Saudi Arabian fashion show featured the use of drones instead of models to showcase the clothing and accessories down the runway. The photos and videos of the fashion show were shared on social media, and the story has since gone viral. People mistakenly assumed that this happened because the women were banned from the show. But a designer clarified that the drones were used because the theme of the fashion show was about technology in Saudi Arabia. 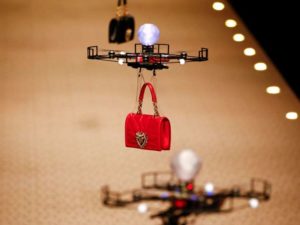 The show came just weeks after the very first fashion week held in Saudi Arabia. The show was held by one of the most powerful families in the country. The event, called Fashion House, was thought to be worrying, mostly because it was held with the holy month of Ramadan. The idea behind the event was presented by Hanen Aljawharji, to showcase the evolving technological advances made in the country. As part of the theme, Fashion House decided to use drones instead of models in the runway. 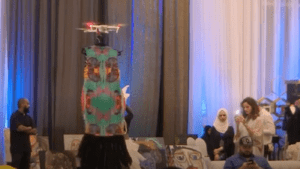 “The event was focusing on the new technology, and the new era in technology, in the Middle East,” Aljawharji said. “Rather than just normal, traditional, and old school modeling.” Drones in the fashion show flew very low and carried skirts, dresses, hand bags, and even traditional Saudi dresses, across the runway. Women are, in fact, allowed to model in Saudi Arabia during fashion week, although only other women were allowed to attend these events and photography was strictly forbidden. Event organizers were also very mindful of Ramadan and they were careful to emphasize modesty.

“It’s not an issue having modeling here. It’s kind of being more religious,” Aljawharji said. “This is the holy month of ours, so [models would] be wearing stuff that’s not appropriate… We keep the respect of the religion and the rules.”