Earlier this week, history was made when the very first Gerber baby met the newest Gerber baby. The two spokespersons for the baby brand were 90 years old apart. The very first baby to represent the Berber baby food brand was 91-year old Ann Turner Cook. She was the model for the portrait used for Gerber in 1928, when she was only five months old. Cook met the latest Gerber baby, a 1-year old boy named Lucas Warren. 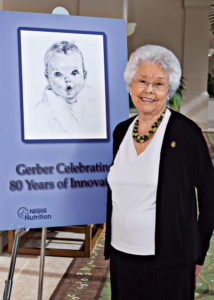 The meeting of the two babies was a historical event. The two met last week and posed for a memorable photo. 91-year old Ann Turner Cook carried in her arms one year old Lucas Warren. Warren also made history by being the first baby with Down Syndrome named as an official Gerber baby.Â  Cook was sketched as a baby and her image was used as the iconic picture of the Gerber product line. She was chosen as the official Gerber baby in 1928 and her picture became the company’s official trademark in 1931. 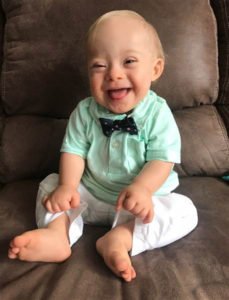 Ann Turner Cook’s grandson, Chris Colin, took a photo of the two Gerber babies meeting for the first time. He posted the photo on his twitter account, where it quickly went viral. Gerber has been synonymous with baby food for nearly a century. The company just celebrated its 90th year in service last year. The company was founded in 1927 by Daniel Frank Gerber in Fremont, Michigan. It has since become one of the largest baby product companies in the world. To this day, the company still makes its trademark baby food.