Family Live in Arctic Circle for Free with Biodome House

When Ben and Ingrid HjertefÃ¸lgers were looking for a home, they wanted something unique and something that they could build on their own. They were able to find somewhere to build for free, on the island of SandhornÃ¸ya, Norway. But the only catch was that it was located in one of the coldest places on earth; the Arctic Circle. 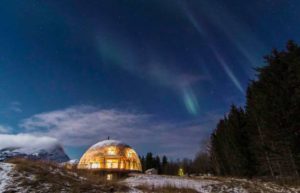 The HjertefÃ¸lgers wanted to build a home in a way that would allow of sustainable living. It was a challenge living so near the arctic, but they were able to survive my designing their house like a greenhouse. The island is located around the Arctic Circle. The place only has a few million people living in it, and the place experiences the most extreme weather conditions. Not only does it have the coldest winters, but it is also one of the longest winters in the world. But they had a few ideas on how to overcome such difficult circumstances. 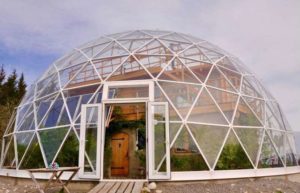 “We came across an article about a Swedish family living in a ‘nature house’, which is a house inside a greenhouse with its own water recycling system,” Ingrid says, “The house was built to help the family survive the cold weather in Stockholm, Sweden.”

“We were doing research online about different natural building techniques, and fell in love with cob houses [homes made with natural materials]. But that seemed like a difficult thing to do in Northern Norway, with short summers and a lot of rain,” Ingrid says. And so the HjertefÃ¸lgers built a three story cob house with recycled materials such as clay, straw, and wood.

“Building takes time,” she adds. “It took one year for the initial build and five years all in all. Even when we moved in there was still lots of work to do. Actually, we still have a few unfinished rooms in the house!” The house is currently 240 square meters with five bedrooms, two bathrooms, a lounge, a kitchen, a dining room, and even a garage.