Batman Pulled Over by the Cops in Viral Video

Earlier this week, a man was pulled over by a police car in Brompton, Canada. But this wasn’t your typical traffic stop. The car was a Batmobile, and the driver was none other than Batman. It turns out that a man dressed in full Batman costume was stopped by a police officer, not for any violation, but to say thank you for an escort. The police officer also wanted a selfie with the Dark Knight. 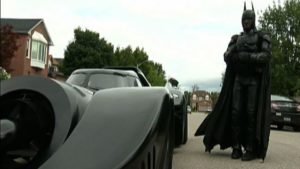 The man in the bat suit was Stephen Lawrence. He is known as the “Brompton Batman” because of his preference to dress up as the Caped Crusader. It turns out that Lawrence was concerned about some people following him in a car taking pictures and he asked the officer for assistance when he pulled over next to her at a traffic light. She escorted the Batmobile for while and then pulled him over for a photo op. 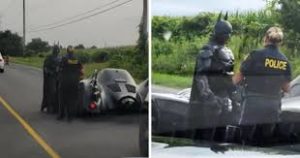 The 42-year old Lawrence is a factory worker in Brompton. He doesn’t just dress up as Batman for kicks. He often appears for charity events and he even helps out other motorists in need. Lawrence bought the custom made Batmobile in 2015. It was a Chevrolet Caprice converted to look like the Batmobile in the 1989 Michael Keaton Batman movie. Lawrence says he loves it when people recognize him and always accepts having his picture taken but he didn’t approve of using cellphones while driving to take pictures. He said it could be dangerous for the driver and himself on the road.

“If you start to pace beside me, it means that both of us can be put in jeopardy if something were to happen,” he said.