Fake Coin Turns Out to be Worth Millions 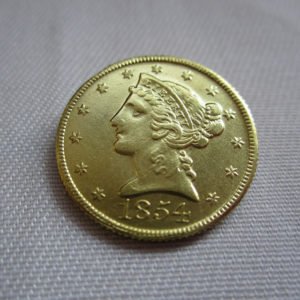 The coin collector was from New England and had shown his 1854 Half Eagle $5 coin to other collectors. The coin was one of only three coins that could have survived to this day so he was told that it was likely that the coin was a counterfeit. He was unconvinced and took the coin to another dealer. The dealer brought the coin to the Numismatic Guaranty Corporation or the NGC, the world’s largest rare coin authentication company. The company compared it to the other coins to remain and he was told that his coin was authentic.

“He was stunned when we informed him that it is a genuine, multimillion-dollar, rare coin,” said N.G.C. chairman Mark Salzberg ,“It’s like finding an original Picasso at a garage sale. It’s the discovery of a lifetime,” he added. Only 268 of the coins struck at the mint survived to this day. And only three gold $5 coins are known to exist. One of them is found at the Smithsonian Institution in Washington D.C., the second coin is owned by a family in Texas, and the third coin was stolen from a wealthy family in Florida, in 1967.

“Our initial reaction on examining the coin from New England was utter disbelief that a rarity of this magnitude could still be discovered in this era. But upon seeing the coin in person for the first time it was apparent that the coin is genuine,” said N.G.C. President Rick Montgomery.