In Japan, a female giant tortoise was found after escaping and going missing for more than two weeks. The tortoise was found just 500 feet away from the zoo. The 35-year old giant tortoise is named Abuh and measures three feet in length and weighs approximately 120 pounds. The tortoise was part of the Shibukawa Animal Park in the Okayama prefecture of Japan. The large reptile was usually allowed to walk freely around the zoo, but two weeks ago, the zookeepers entered the park one morning and were unable to find Abuh. 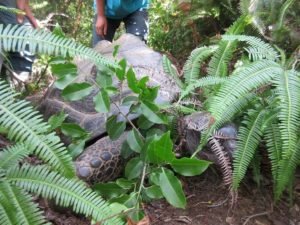 After searching the surrounding area and failing to find the giant tortoise, the zoo offered a reward of 500,000 yen ($4,500) to the safe return of the tortoise to the animal park. That was when a local found the reptile just 500 feet away from the zoo. According to the local, who was actually a bounty hunter, he spotted the large tortoise walking around in nearby shrubbery. The tortoise was described by zoo staffer as having a gentle disposition.

“We were so relieved that she came back safely as she is so popular among children,” said zoo staffer Yoshimi Yamane, “We will try to take new measures so that this won’t happen again.” This was actually the second time in a little over a month that the tortoise Abuh disappeared. The missing tortoise was among the top news items and even reached the national news level. According to reports, the tortoise is back in the animal park, where its keepers are sure to keep a keen eye on here from here on out.