College Football Player Who Volunteers With Kids Gets Surprise Scholarship

Justin Juenemann was a student athlete for the University of Minnesota. He was backup kicker for the school’s football team, but he has yet to see action for his team. But that does not mean that he has stopped with his extra-curricular activities. Justin uses his free time to volunteer at the local children’s clinic. This act of kindness did not go unnoticed by the team and the school. 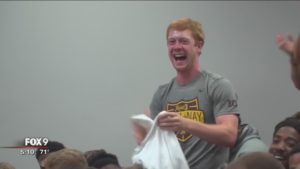 So one day, head coach PJ Fleck asked Kyle, patient at the University of Minnesota Masonic Children’s Hospital, to talk to the team. During his speech, he mentioned how Juenemann was often at the hospital. At that point coach Fleck asked Kyle to use the T-shirt cannon to send Juenemann a t-shirt as thanks for being such a good representative of the team and the school in the local community. But when Juenemann opened the t-shirt, he found out he more than just a shirt for a reward. When he read the t-shirt, it read: “Justin, congratulations on earning a scholarship!” 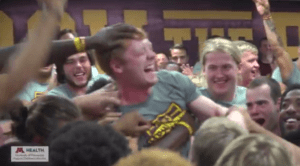 “I’ve never seen anybody serve and give more than that guy, who is not a star player, who hasn’t played, where his face is recognizable,” said coach Fleck after the surprise, “He could easily just not do it and nobody would ever say anything, and all he does is to continue to keep his oar in the water, (and) live that holistic life academically, athletically, socially and spiritually.”

“It was an amazing feeling,” Juenemann said afterwards, “It is something that I will never forget.”