Masaaki Nagumo has always dreamed of piloting one of the robots from his favorite animated series “Mobile Suit Gundam”. The series features among the most iconic robots in anime. Â Nagumo eventually grew up to be an engineer, a career that eventually gave him an opportunity to make his childhood dream come true. 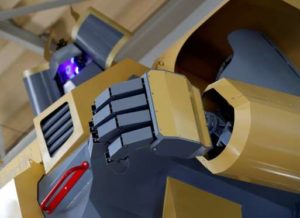 Nagumo was able to build a Gundam because of his work with Sakakibara Kikai, a maker of farming machinery. His robot is 8.5 meters (28-feet) tall and weighs more than 7 tons. It has a cockpit with monitors and levers for the pilot to control the arms and legs. Sakakibara Kikai has developed other robots as a side project to its main agriculture equipment business. The company rents out the robots for about 100,000 yen per hour. They are often rented for birthday parties and or events for kids. 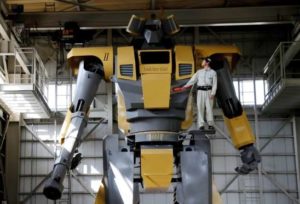 The Gundam robot is the biggest robot that the company has made so far. It can move its fingers, and turn its upper body. It is also able to move forward and backward, although it can only do so at less than 1 km per hour. It also has a bazooka air gun on its right arm that shoots sponge balls at 140 KPH.

“As an anime-inspired robot that one can ride, I think this is the biggest in the world,” said Nagumo. One of the biggest challenges of the robot is transportation. The robot is so large that it has to be dismantled to be able to leave the factory. Otherwise, it would not be able to fit through the main entrance.