Elephant Washed Out to Sea Rescued by Sri Lanka Navy

In Sri Lanka, divers came to the aid of wildlife officials as they approached an elephant that had drifted 9 miles off of the coast. Wild life officials had tied ropes to the large animal so they could tow it gently into shallow waters near the shoreline. Once the elephant was able to reach land, it was released into the jungle. According to the Navy of Sri Lanka, the elephant got into troubleÂ when it was washed out to sea and needed help from authorities to get back to shore. 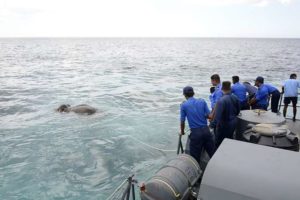 According to Chaminda Walakuluge of the Sri Lankan Navy, they coordinated a 12-hour rescue after first spotting the elephant struggling to stay above water around five miles off of the north east coast of the island. The divers from the navy aided the wildlife officials to approach the stressed animal and helped in tying the ropes around the elephant. According to Walakuluge, the elephant had most likely gotten swept into the sea when it was attempting to cross the Kokkilai lagoon, which is a large body of water that lies between two jungles in Sri Lanka. 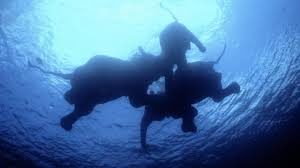 “They usually wade through shallow waters or even swim across to take a short cut,” he said. “It is a miraculous escape for the elephant.” The Sri Lankan navy posted photos of the animal that was trying to keep its trunk above water as the divers approached it. The rescue occurred just six weeks after the navy and locals also saved a pod of 20 pilot whales that became stranded in a natural harbor that is popular for whale watching. Elephants are actually strong swimmers and pods of elephants have been spotted miles off the coast before.