Matt Johnson from San Antonio Texas is the proud owner of the Living Light Shows. The shows are actually a designed Christmas display displayed on his neighborhood home. The display was set up by Johnson and his wife and includes more than 15,000 lights. This year’s lights took on the theme of the hit film Star Wars. 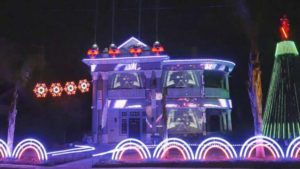 Johnson did something similar on his house in 2015, but it was shut down after it drew too much traffic from bystanders and cars passing by. This was despite the fact that his local homeowner’s association supported the decorations. Johnson said that he thinks people are used to regular Christmas light displays so he decided to do something new.

“We shut down after 2 weeks and decided if we ever did another residential light show it could not be at our house but had to be at a venue that could support the traffic flow and provide a large area for people to congregate,” said Johnson. 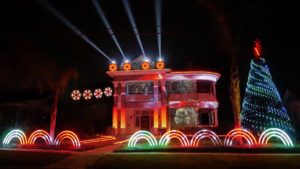 This year, Johnson and his family set up the display at a different home that Johnson’s wife spotted while jogging around the neighborhood. The couple thought that it would make for a great location for their light show this year. The Christmas lights were designed to commemorate the latest Star Wars film, which was released earlier last week. The light presentation has elements of the Star Wars series, including the Imperial March of the famed Darth Vader. The lights display runs every night between 6 p.m. to 10 p.m. These lights will continue to run until New Years day.