One of the biggest sporting events has come around again with the 21st FIFA World Cup. The World cup is the biggest tournament for the biggest sport in the world. It is a time when everyone gets to cheer their own team in the ultimate team sport. But while some many think that such an event can divide and separate people, there are actually times when it brings people together. 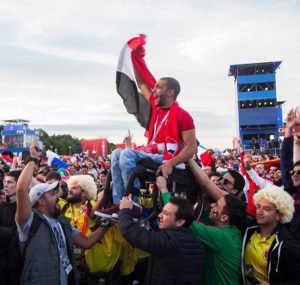 This can be seen during the early match between Egypt and Uruguay. Fans from Mexico and Columbia worked together and lifted an Egyptian fan in a wheelchair so that he could see the screen at the FIFA fan zone in Moscow. The incredible moment was captured in the photo and posted on social media, where it quickly went viral. Despite the dedication of fans to their own country, they still the decency and generosity to help a fellow fan appreciate and cheer his own team. 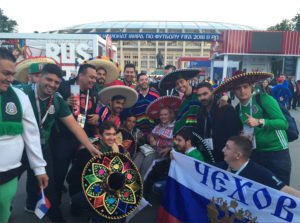 “Football brings people together and that’s the beauty of the game,” one user wrote on social media. Another fan wrote: “Truly proud that our nations could get together to lift up another.” The photo has also brought people together and made them feel good that despite the rabid fanatic label that football fans are portrayed as. It proves that these fans are actually also good people capable of acts of kindness. It has even inspired other fans to show kindness to others at the World Cup. Another photo shows Mexican fans gifting their sombreros to a handicapped Russian fan.