In Alexandria, a local Egyptian artist named Abdelrahman al-Habrouk is making a name for himself by creating portraits with the use of tobacco. Habrouk has a small studio in Alexandria, which is full of discarded cigarette packs. He uses the tobacco in cigarettes and burns them in white paper to create amazing portraits of celebrities and famous people. 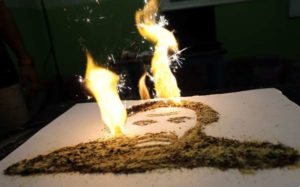 According to Habrouk, he starts by breaking a cigarette in half then meticulously traces out an image of people or animals with the fine flakes of tobacco. He uses the tobacco as fuel then sprinkles the entire piece with gunpowder and sets them on fire. The result is scorch marks that form a face or an image on the paper. The method is part of his art and videos of how he creates his portraits have also garnered online attention.

The 23-year old artist started using different kinds of materials to make his portraits several years ago. He started with coffee grounds, then used salt, and even sand, but he eventually settled on using tobacco as his tool because he says it is much more durable than the other items. 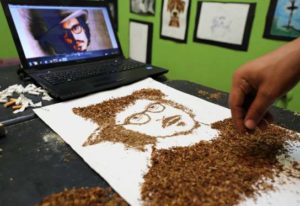 “The idea is that I’m trying to make the art live longer,” said Habrouk “I wanted to make something good out of something that is considered harmful.” Among his most well known pieces includes tobacco portraits of famous Egyptian actor Adel Imam, and of world famous international actor Johnny Depp. Most of his art is displayed in his small studio, although he says he plans to hold an exhibition soon.