Puma Makes Herself at Home in An Office

Finding street cats or stray cats in your office or home can be a nuisance, but when that cat can eat you alive, then that’s a whole different story. That’s the case for an office in Brazil earlier this week. In a small town called Itapeceroca Da Serra, in Sao Paolo, Brazil, the staff at the factory office called in the local fire department when they found a puma on the office floor. 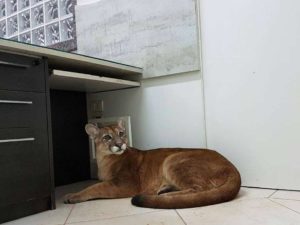 The news broke of the office invasion and the pictures and videos were sent all over social media. In one picture, you can clearly see the large wild cat peeking over the desk. In one video, you can hear the puma growling and roaring at the emergency services that wanted to capture it. But eventually emergency services were able to detain the puma. After it was captured, the large feline was transported to a non-government organization that specializes in animal rescues.

“We believe the puma came out of its habitat because of constant wildfires,” the Sao Paulo state fire department said on Facebook. There have been wildfires in the area of Sao Paolo in the recent weeks, and the fire and smoke could have driven this animal out from its natural habitat and under the desks of this unassuming small town office. Thankfully, no one was hurt in apprehending the wild puma, and the large cat is safely in the hands of the animal services. Pumas or cougars are one of the most adaptable wild cats in the Americas, and they can be found in several different climates and habitats around the world.