Eagle Harasses Baseball Player on the Field Before a Game

Earlier this week, an American eagle, also known as a bald eagle, was used in an opening day game of the MLB or Major League Baseball. The bird was pretty big and it got its share of cheers from the crowd as it flew around the field during the opening ceremonies. But then things started to get interesting when it set its eyes on the starting pitcher.

The game was between the Minneapolis Twins and the Seattle Mariners. The bald eagle was released around the opening ceremonies and flew around the field. Then it approached the starting pitcher of the Mariners, James Paxton. At first it just flew near and around the baseball player, but then it got bolder and bolder and eventually landed on his back where he tried to climb up his shoulders. 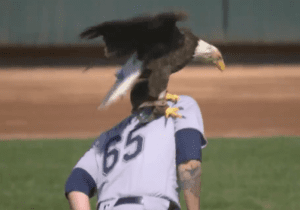 To Paxton’s credit, he was calm about the entire ordeal and barely moved away even as the bird had landed on him. He crouched to get it off and looked at the large bird when it was near, but he was otherwise not concerned with what the eagle might do. The handler immediately rushed in to get hold of the eagle where it could perch on his heavily gloved hand. The eagle was a trained bird, but it still had a very sharp beak and long and sharp talons. The photos and video eventually made its way to social media where it quickly went viral. 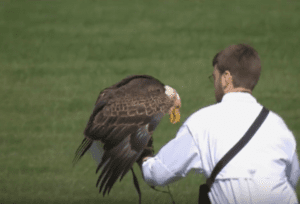 “Maybe the little guy was just looking for some of those Cracker Jacks everyone’s always singing about; maybe he was trying to show a Canadian how majestic America’s national bird could be. Or, maybe, he was mislead by a commercial featuring James Paxton with a nest in his baseball hat.” said one tweet.