The Police at Holland have recently been making use of “trauma bears” to help comfort children during traumatic and stressful experiences. The trauma bears are stuffed animals or teddy bears that are given to young children to distract them from a stressful situation or calm them down after they have experienced something traumatic. 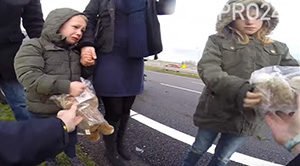 “I witnessed an accident a few years ago and a child that was involved was really, really shaken,” said one comment on the video. “The cop that was first on scene did a quick check then grabbed a stuffed animal from the trunk and gave it to the boy and sat him down to relax while the officer talked to the parents. The boy talked to the bear and it brought him back within just seconds of being sat down.”

The idea of using trauma bears or similar toys started in 1968 in England. Radio pioneer James Theodore Ownby, Colonel Robert Henderson, and English actor Peter Bull launched an organization called Good Bears of the World. Its goal was to spread love and caring to children and the elderly who were in need of comfort during trying times. The group started by donating teddy bears to police departments in the early 1980’s.

The group has slowly gained popularity in the last decade and a half. It has also been bolstered by the positive results of providing traumatized people with sweet teddy bears for comfort. Since its founding, the Good Bears of the World has given thousands of teddy bears all over the world.