Earlier this week, Catherine, the Duchess of Cambridge, was seen dancing with Paddington Bear as she made a surprise appearance at a charity event for children. With Kate was her husband William, the Duke of Cambridge, and his brother Prince Harry. The trio was present at Paddington Station in London to support several charities in an event that sponsored boarding the Belmond British Pullman train. 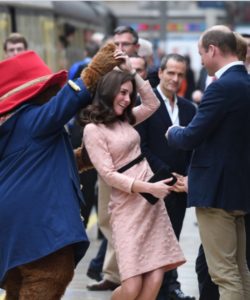 The royal trio joined more than 130 children from 12 charities as they enjoyed the festivities, including an appearance by Paddington Bear himself. Among the children included in the event were the young survivors of the Grenfell Tower fire. The royals were also present to wave off the Belmond British Pullman as it started its journey through the English countryside. A mascot of Paddington Bear was there, in part, to promote the upcoming film, Paddington Bear, the movie. Also present was actor Hugh Bonneville, who plays Henry Brown in the movie. 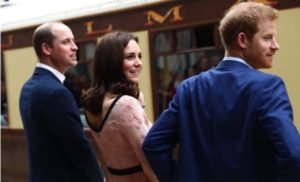 The Duchess is currently pregnant with her third child to Prince William, and she is suffering from morning sickness. But that did not stop her from participating at the event, even dancing with the Paddington Bear mascot. The Duke, the Duchess, and Prince Harry divided up the carriages so they could speak to as many children as possible. 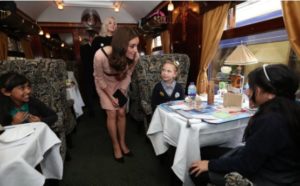 “Have you ever been on a train like this?” the Duchess asked a 10-year old girl. “No, I haven’t either. I was just saying how big and comfy the seats are.”