Day of the Dead Parade Celebrated in Mexico City

In Mexico City, citizens celebrated the Catrinas parade, also known as the Day of the Dead festival and parade. The street celebration is actually a recent development of the holiday. Usually the day is celebrated privately in homes, but thanks to the 2015 James Bond movie “Spectre”, the city now started to celebrate the parade in real life. 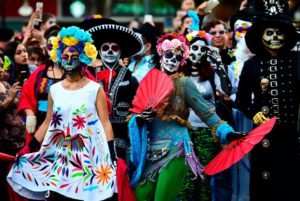 The movie Spectre’s opening scene was of the skeleton parade that actually did not exist in real life. But because of the popularity of the movie and the willingness of the locals, Mexico City has now started to celebrate the day with a parade. The parade is also a bid to attract more tourists during the Day of the Dead celebration. Now Mexicans from all over the country flock to the capital to dress up like skeletons and other dead-themed costumes. 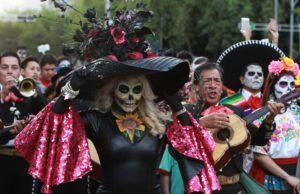 The Day of the Dead holds a celebration for La Catrina, a female skeleton character who represents death. The character was created by the popular cartoonist Jose Guadalupe Posada, an artist famous for his drawings of skeletons and of the dead. The festival for the day of the dead, also known as Dia de Muertos, usually involves a gathering of the family to honor and pray for the dearly departed. They also pray for support for the spiritual journey of those that have passed on. Another tradition involves cleaning the grave sites of the lost loved ones and bringing food and beverages for the dead.

“We have to invent the Day of the Dead carnival because, after the James Bond movie, tourists are going to come looking for the carnival and they’re not going to find it.” said Tourism Minister Enrique de la Madrid Cordero said.