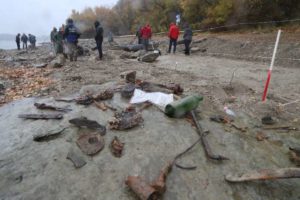 But now Archaeologists are working hard to collect as much samples and information as they can from the Danube site as the water levels are expected to rise by the end of the week. The researchers are assisted by divers to help with the deeper parts and with drones to get an aerial view of the river site. The discovery was made last week where the river passes beside the town of Erd, south of the capital of Budapest.

“Around 2,000 coins have been found, as well as arms, pikes, cannon balls and swords,” said Katalin Kovacs, an archaeologist from the Ferenczy Museum Center. Like most rivers in Europe, the Danube is experiencing historically low levels of water after a low period of dry weather. In Budapest, the waters are running at just 15 inches, which is actually affecting shipping traffic. 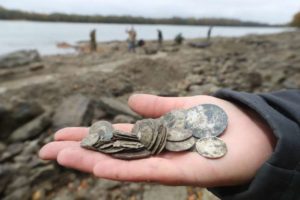 “The coins are 90 percent foreign and date from between 1630 and 1743”, says archaeologist Balazs Nagy, “They could have been minted in the Netherlands, in France, Zurich and even the Vatican.” The treasure trove includes ducats and pennies. Most of them were found along a shipwreck of a trading boat with an unknown origin.