In Cuba, a team of rescue workers managed to airlift a group of dolphins away from the coastal area, before the Hurricane Irma arrived. The hurricane was set to hit the coast of Cuba in a just a few hours, where it will be carrying with it 160 mph winds and rain. The dolphins were placed in an aquarium on the Cayo Guillermo Island, which is located just north of the central coast of Cuba. 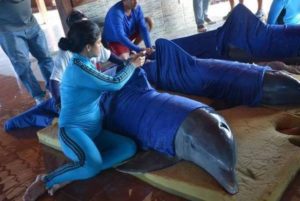 Rescue staffers gathered six dolphins from the coast and placed them on mats, then wrapped them in giant wet blue sheets to prepare them for the evacuation. Trainers were also on hand to massage the animals to relieve their distress. From there, rescue workers carried these dolphins on poles on their shoulders to a helicopter, which was waiting to fly the animals to safety to the province of Cienfuegos. 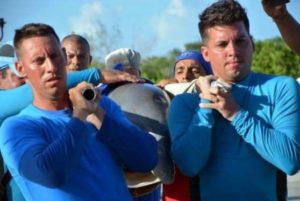 On the island, the dolphins were placed in a swimming pool in a special aquarium where the trainers said gave them “similar conditions to their natural life”. And according to the manager of the Dolphinarium, they already have contingency plans if the hurricane reaches the pools. “If the weather situation does not allow us to keep them there, they will be displaced to the saltwater swimming pool of a hotel.” said manager Gonzalo Carrero Escobar.

The dolphins got out just in time, television footage showed large waves crashing along the coasts where it took down power lines and many small structures. So far, there have been 21 casualties from the wake of the super storm.