A couple that bonded over their love for dinosaurs decided that they would incorporate their common interest in their wedding. They used a Jurassic Park theme for their $25,000 wedding. The theme was used in the decorations, and with the cake and colors, and even in the attire. In fact, the bride even used the Jurassic Park theme music when she walked down the aisle. 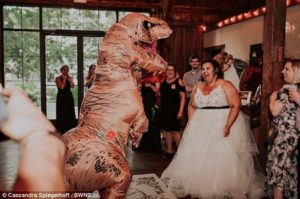 Billy McMillion and his wife Courtney from Sturtevant, Wisconsin spent the past 18 months planning their wedding. The entire venue was decorated with inflatable dinosaur decorations and forest greens. The bride also arrived in a Jeep Wrangler, the same vehicle used in the original movie. Courtney’s bridal party also wore Jurassic Park shirts as they got ready for the ceremony, while the groom crafted a donut wall to look like the front gates of the park in the movie. Courtney says she loved the movies since she was a young girl and she was happy to find someone who was just as big a fan. 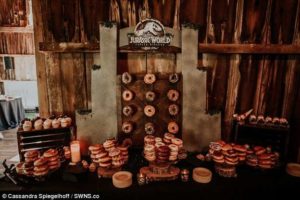 “It was more so me who always loved Jurassic Park. I remember watching it when I was small and that’s when I first fell in love with it. When the original first came out in IMAX, I was so excited but no one would go with me. At the time me and Billy were just good friends and he offered to go.” said Courtney

“We started dating in October 2013 and we just loved staying in and watching movies together. We would regularly watch Jurassic Park or it would coincidentally be on TV. It sort of became our thing. We would go to dinosaur museums and exhibits on dates.”