Earlier this week, during the Little League World Series, the Team from Venezuela defeated the Dominican Republic 3-2 on a walk-off triple on the bottom of the last inning. It was the last play of the game and the Dominican pitcher Edward Uceta gave up the game winning hit. Uceta was visibly devastated and immediately collapsed to the ground, crying on the pitching mound. 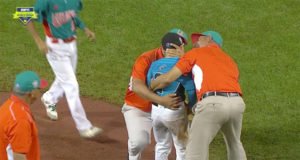 It was a heartbreaking moment that was noticed by the winning team. Despite the entire Venezuelan team celebrating on the field, the coaches and even a few players approached Uceta and brought him up and consoled him. Uceta had actually pitched a good game and had only given up one hit and one run before the final inning. The commentators even said that Uceta had nothing to be ashamed of and he played a great overall game. 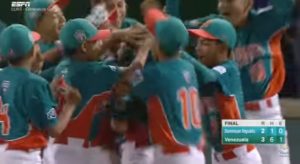 The Little League World Series is an annual tournament held in the East coast of the United States. The baseball league is for players aged 11-13 years old. The Series was first held 70 years ago in Williamsport, Pennsylvania. The Series’ participants are made up teams from regions all over the United States, as well as countries all over the world. In fact, most major league players started out playing Little League. A regulation game in Little League is only for 6 innings. The winning play was made at the bottom of the 6th inning. If Valenzuela had failed to score within 3 outs, the Dominican Republic team would have won.