Deputies Pushes Elderly Woman When Her Wheelchair Runs Out of Power

In Los Angeles, a pair county sheriff deputies is being praised for pushing an old woman on her motorized wheelchair when the chair ran out of power in the middle of the road. In the video, which has since gone viral, we see one of the deputies get out of his car and push the elderly woman all the way to her home. 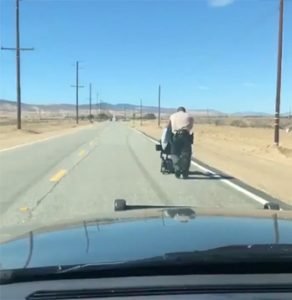 It all started when sheriff deputies Chapman and Montanez of Lancaster received a call about a traffic hazard. The call was about a wheelchair in the middle of the road. They responded to the call and they were shocked to find that the wheelchair that was causing all the traffic still had an old woman sitting inside it. Apparently, the motorized wheelchair had run out of power and she was stranded. 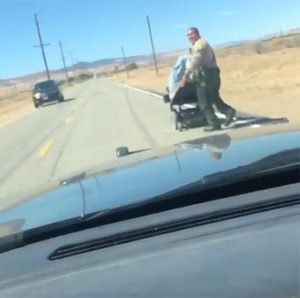 And so Chapman and Montanez offered to give the old woman a ride home. Even though she agreed, she was still upset about leaving the chair behind. The motorized wheelchair was heavy and you could not fold it because of the battery pack. It was also so big that it could not fit inside a patrol vehicle. So Montanez decided that he would just push the wheelchair to her house, which was one mile away.