Dad Picks Up Son from School In A Speedo

As teenagers, we always wanted to limit the time we spent with our parents, especially at school. There was just the horrible chance that they would do or say something that would embarrass us in front of our friends and classmates. Or worse, that these parents would actually want to do something that would be embarrassing to their kids. Justin Beadles took this to a new level earlier this week. Beadles was asked by his son to pick him up from school and he did so in special attire. 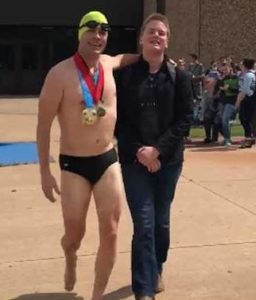 Beadles’ son Jack had just finished his last day of school at a local high school in Stillwater, Oklahoma when he texted his dad to pick him up. That’s when Justin had an idea for an epic prank. He borrowed a few medals from a friends and arrived on the school wearing nothing but the medals, a swim cap, goggles, and a tiny pair of swimming Speedos. Then he walked barefoot to the school screaming his son’s name: “Jack! Jack!” 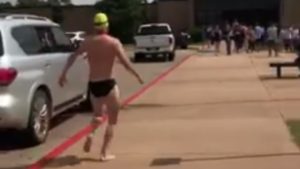 And although Jack just wanted to turn invisible that day, he says he’s come to appreciate the stunt. Although he did not find the humor of it at the time, he says it was one of the funniest things he’s seen his dad do. And the coworkers of Justin are not surprised that Justin’s antics have gone viral online. They say he does this kind of thing almost every week. And what does Justin do for a day job? Ironically, he’s the senior pastor at the Countryside Church in Stillwater.