Earlier this year Daniel Moor snuck out his son, Charlie, from school to go on vacation. But the school did not appreciate this and sent the Moors a letter reprimanding them for their actions. Moor had no problem with this, but he did have a problem with the letter that they sent. The letter was full of misspelled words and typos, so Moor corrected them and sent it back with a low grade (sadly it got a “D”). 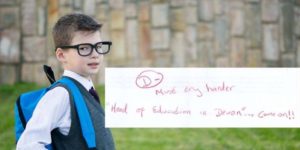 In the letter, the Bassetts Farm Primary School told him he was “guitly” for failing to send his son regularly to “hte school”, so he would have to pay a fine through “debit/cred card”. Daniel did not particularly like the carelessness of the letter and took a red pen to grade the terribly written letter. The letter was then posted on social media, where it quickly went viral. 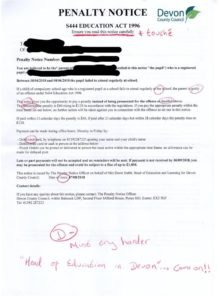 “I’m not going to pretend I’m a Spelling guru or a typing expert. But I’m also not the Head of Education in Devon. This woman’s in charge of the future generations education, our children’s education and she’s rubber stamping this tripe! I’m going to pay the fine, no questions asked but I shall also be sending her letter back marked & graded. Maybe I’ll throw a little holiday snap in as well!”

“I was fully aware of the risks involved but thought it was well worth it for the experience of the holiday,” said Moor, “We don’t regret it one bit. I’ve said that I’ll pay the £60 fine but I just wanted to make sure people could see how sloppy the letter was.” The school has since responded saying the spelling errors were because of the new IT printing system.