In Bellevue, Washington a regular customer in a restaurant called the Brief Encounter, stunned the employees there when he left a $3,000 tip after eating a $39 meal. The staff initially thought that the man had made a mistake, but after reading the note that the man left at the back of the receipt, they knew that it was for real.

The letter that the man left read: “You guys do a great job! When I was 7, I washed dishes and my mom cooked in a diner like this. We were dirt poor and didn’t have money for Christmas. Hopefully, this will help all of you have a better Christmas.” The owner of the Brief Encounter Melanie Bard identified the man as Dwayne Clark. Clark is the founder of an assisted living community, and he comes to eat regularly at the restaurant with his wife and kids. 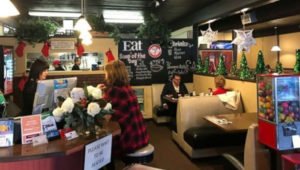 “He’s a great customer when he comes in,” said Bard. She also mentioned that Clark has been coming in to the restaurant for the past 8 years. According to the restaurant, the 12-person staff will evenly split the tip as requested by Clark. The tip comes down to around $250 each employee. Clark also said that it wasn’t about the amount of money, but the sentiment behind it.

“You don’t have to give money. You can write appreciative notes and say thank you,” said Clark about his tip. “It would go a long way to nourish all of us.”