Custom Bike Made for Girl with No Arms

A five year old named Ruth Evelyn Pranke, or R.E. for short, was born without hands and arms. It was a difficult disability to overcome, but Ruth was able to do almost anything with the use of her feet. But this brave girl recently wanted to do something that would have been difficult to do without arms and hands. Ruth said that she wanted to ride a bike. What seemed like an impossible dream was made into reality thanks to a custom bike made specifically for R.E.

Prosthetic experts at the Gillette Children’s Specialty Healthcare designed a custom bike that R.E. could use. The bike makes use of a tether that goes around her shoulders and connects to the handlebars of the bike. The strap and tether allows R.E. to balance on the bike and use her shoulders to steer it. According to R.E.’s mother, she was determined to ride a bike, so they were also determined to make that happen for their child. 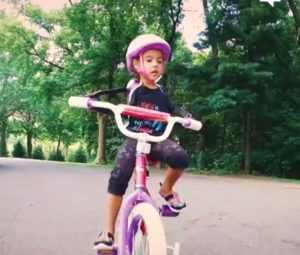 So when it came time to test it out, R.E. was ready and willing to make practice runs with the strap and the custom bike. In just a few minutes, R.E. was able to pedal and balance on the bike for a few feet. She had a hard time at first, but after a few more practice runs, she started to understand how to move and steer using her body.

“I’m getting the hang of it!” R.E. said as she was able to complete and ride in a circle.