Cristiano Ronaldo is one of the more popular football players in the world. The striker from Real Madrid is not only known for his skill on the pitch, but also for his dashing good looks. Ronaldo has made his looks into a business, appearing in my posters, commercials, and TV ads. That is the reason why the recent bust made in honor of the athlete has garnered so much attention and hilarity. 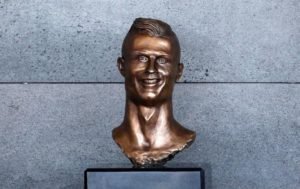 The bust was a bronze statue made in the likeness of the football star at a ceremony in Funchal, Portugal. The Funchal airport was to be named the Cristiano Ronaldo Airport in honor of their favorite son. Ronaldo was also scheduled to make an appearance at the ceremony, where he is regarded as a hometown hero. But despite the celebrity of the 32-year old Ronaldo, all eyes were trained on the bronze bust, which not only did not look anything like the Ronaldo, but rather as a funny parody of the striker. 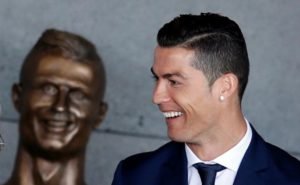 The picture of the bronze bust has since made its rounds in social media, where people have taken to ridicule and laugh at the incredible likeness (or the absence of likeness) to the Portuguese star. This is not the fist statue erected in the honor of the 4-time footballer of the year. A full body statue of Ronaldo was also erected in his home town. And while there is also no resemblance of the footballer to the statue either, at least that one was definitely less comical.