In the Philippines, tens of thousands of people have evacuated their homes because of an active volcano suddenly erupting. But for this couple, they saw it as an opportunity for an once-in-a-lifetime photo-op. Newlyweds Arlo De La Cruz and Maica Nicerio got married in front of Mount Mayon, one of the most active volcanoes of the country. But little did they know that the mountain would be erupting just as they finished their vows. 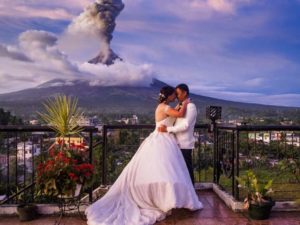 The wedding photographer Franklyn Nebreja was lucky enough to get a shot of the couple with the erupting volcano in the background. These wedding pictures have since gone viral. The photos were posted on Facebook, where it has received over 30,000 shares and more than 92,000 reactions in less than a day. The pictures show the happy couple with a massive eruption cloud rising from the peak of the volcano.

“We really intended to include it (the erupting volcano) in the photo despite worries of the couple on the possible dangers of Mayon during their wedding day,” said Nebreja, who is a resident of the area. According to local reports, more than 80,000 people have evacuated the area. There have already been photographs and video of the volcano spewing lava, ash, and molten rock form the crater. 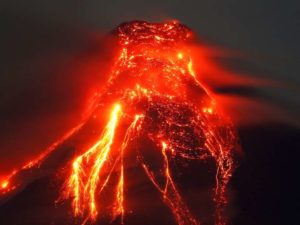 The Mayon Volcano is 8,081 feet high, but the area around the volcano has been evacuated with a level 4 alert. According to the Philippine Institute of Volcanology and Seismology, there is a chance that the volcano could enter a more explosive phase in the near future.