When Giles and Michelle Paley-Philipps first met, they were kids who knew each other in a local drama group in East Sussex in the United Kingdom. They eventually fell in love and decided to take a photo booth picture at a train station one night. This would end up to be a tradition that would continue for the next two decades. The story has since gone viral, with most people remarking on how old Giles had gotten (thanks to the grey hair) and how young Michelle still seems to be. 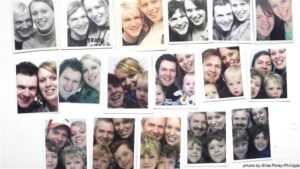 The first picture that Giles and Michelle took at a photo booth at a train station in 2000. They had just gotten together and they wanted a small souvenir of that time in their lives. In the first photo, we see both of them glowing in their youth (despite the picture being in black and white). The next year they decided to take the same photo. By the third photo, they had gotten married and unknowingly had started a family tradition.

The yearly picture would be taken at the start of the winter season, according to Giles. By the 9th picture, the pair would become a trio, welcoming their eldest Elijah into the yearly picture. And in just the very next year, the newly formed trio would become a quartet, with the addition of Â another boy, Sonny. Since then, we can see how their boys have grown each year, and how the once youthful couple has aged into proud parents. The greatest challenge that the family faces now is finding enough space to fit their growing family in their yearly photo booth picture.