For his performance on the basketball court in 2017, Caleb Swanigan has been named as a First Team All American and Big Ten Player of the year. He is very Â likely to become one of the most recruited college players in next year’s NBA Draft, but you wouldn’t know it when he was a child, when Caleb lead a very different life. As a young man of just 10 years old, Caleb was homeless and weighed a staggering 360 pounds. 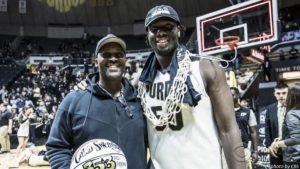 When Caleb was young, he was obese and homeless, shifting back and forth, shelter to shelter, from Indiana to Utah, as his parents struggled to raise him properly. Eventually, his parents gave up their parental rights when Caleb was just 9 years old. Luckily for Caleb, Roosevelt Barnes, the AAU coach for Caleb’s older brother Carl, agreed to take him in and adopt him as his own son. Roosevelt was recently divorced, but felt a connection with theÂ young man and wanted to help him get healthy.

Roosevelt was a former high school basketball star and played in Purdue’s 1980 Final Four Team. Â He was also a former professional football player. Roosevelt, after consulting with a doctor, put his son through the same training regimen he had to go through as a college and pro Â athlete. Not only was he able to cut down Caleb’s weight, but they were both able to discover Caleb’s love for the sport of basketball.

Because of this training in losing weight, Caleb became a natural athlete and a star high school player in Indiana. Not only was Caleb named as Indiana’s prestigious Mr. Basketball as a senior, he also graduated with a 3.3 GPA. Caleb was heavily recruited but settled on playing for Purdue, where his father played. Caleb credits his father for all the accomplishments he was able to achieve in just a short period of time.