Tony and Theresa Matthews from Victoria, Australia have dedicated their lives to helping out baby kangaroos, also known as joeys. So much so that they even let joeys stay in their house with them. And we don’t mean one or two of these baby marsupials. Currently this couple has a 17 kangaroos hopping around in their home. 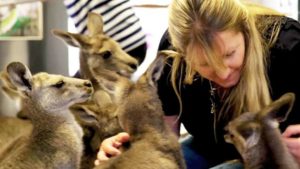 According to Theresa, their love for their kangaroos allowed them to open their home to the creatures. It started with just a few joeys, but their efforts became bigger and bigger, so did the number of kangaroos in their house. Tony explained that their rescue operation, Our Haven Wildlife Shelter, began in 2010. It started when someone drove up to their home and asked whether they knew anything about wild animals and dropped off a kangaroo. They took the joey in and named it Bobby. 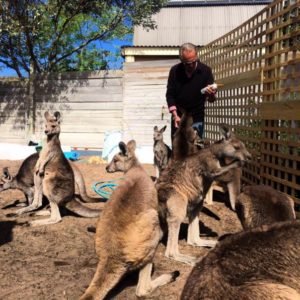 “We realized that there was no one here for these joeys and they were being euthanized, not because there was anything wrong with them, there were just no way to go,” Theresa explained. Since then, the couple has run the rescue center, which has grown over the years.Â  They say that each of the animals have distinct personalities and likes and dislikes. They rescue so many marsupials and many of them grow on them quickly, making it difficult to let them go after rehabilitation.

“It’s hard to say goodbye, and I always cry on the way home, but you know, it’s about them, not us,” Theresa explained. “We’ve done our jobs and we’ve got to let them go.” Aside from the 17 kangaroos, they also have three swamp wallabies and a pygmy possum in their home.