Andrew Leonard and Chela Davison wanted to do something special for their wedding. And since they got engaged in a ski resort, they decided to get married in one as well. For their after-wedding pictorials, the Canadian couple even skied down a mountain while still wearing their wedding attire. They have beautiful photos of the couple skiing in the snow as they descend from the ski slope. 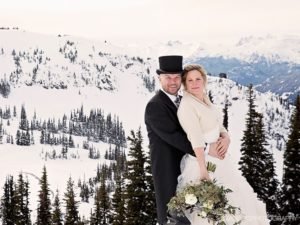 At first the couple had the idea of getting married at the top of a mountain. But that idea wasn’t feasible enough. Instead, they decided to have the ceremony on the slope of a ski resort. After the ceremony, they were able to get a few hours of quiet time at the back slope of the resort. The entire slope was alone except for them and a photographer. According to Leonard, he loved the way that his new bride looked with her white wedding dress against the snowy back drop. There was even a rainbow around the sun to mark such a perfect day. 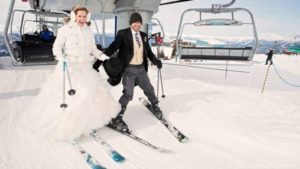 “We have a full ski background just recreationally,” said Davidson, “Our first time away together, a week into our dating, we went on a ski trip in Whistler and then it just kind of became our spot. Andrew proposed there and we had gone every year on our dating anniversary so we decided we wanted to have our wedding there.” With so many of their relationship benchmarks occurring on a ski slope, it was no wonder that their wedding day would also occur on a ski resort.