Couple Gets Married with an Airline Themed Wedding

This couple decided to get married with a very specific theme; Delta Airlines. It was a very specific theme because it was something that was very important to both of them. For one thing, it was during a mileage run with the airlines that led them to date each other. After years of dating, they finally decided to tie the knot. And when it came to choosing a theme, they could not think of anything more appropriate then the airline that started it all. 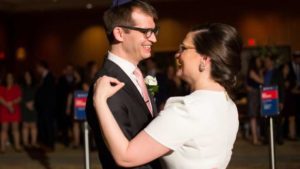 Jeremy Simons and Memphis Tennessee met Bess Wohlner in rabbinical school ten years ago. They were out of touch for a while until Simons suggested that they take a 23-hour flight together around the airports of the country to bring up their Delta Sky Miles. They ended up visiting cities such as Los Angeles, Minneapolis, Miami, Atlanta, and several others without exiting the terminal. Not only did Wohlner agree, she suggested they do the trip twice, back to back, for a 48 hour trip.

The trip eventually led to the pair dating, and when they got engaged, they decided to tie-in Delta Airlines in their wedding celebrations. They had help from a friend who worked for Delta and they used several supplies and a closed airport hub for their wedding. They held luggage during their procession and used the same cups that delta uses for beverages during the reception. And finally, they changed into Delta branded pajamas for their first dance.

“What other airline would we choose?” said Simons “We’re both very obsessed with Delta so it’s kind of a natural fit.”