Remodeling rooms in your house can open up secrets that you never knew about. Things could be hidden under a layer of wood or cement. Earlier this week, a couple that was remodeling their bathroom found something unusual. They found a note and a picture that was placed there from the previous tenants. They message was from 23 years ago and it was placed there under the remodeling that they did during the time. They posted the hilarious message on Facebook, where it quickly went viral. 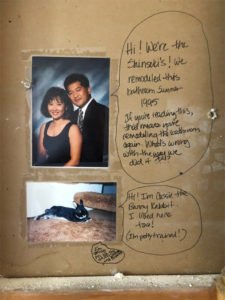 “Hi! We’re the Shinsekis!” said the message, along with the studio picture of the couple. “We remodeled this bathroom, summer of 1995. If you are reading this, that means you’re remodeling the bathroom again. What’s wrong with the way we did it?!?!?'” Below the photo was another photo of their pet rabbit. Beside the photo of the black bunny was another message. 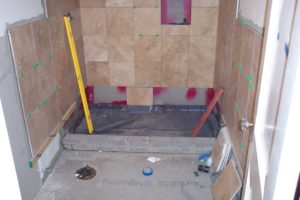 “Hi! I’m Cassie the Bunny Rabbit. I lived here too! (I’m potty trained!). I’m going to be the next Cadburry Bunney.” Since the funny messages were posted, twitter users have been desperately trying to find the Shinsekis couple that left the note. They want to let them know that their note was found, but also to let ask them about leaving the hilarious message.

So far, all that they have found was his brother. Reverend Jay Shinseki from Sunnyvale, California, posted on twitter and said that the man in the photo was his brother, Troy, but he has not yet supplied additional information.