Lauren Durham and Michael Davis are members of the Air National Guard. The couple were about to spend the week on a beach Â for their wedding. But the couple canceled their plans in order to help with the relief efforts in Florida for the victims of the Hurricane Irma. Instead of the beach, the two got married at a convention center in Orlando, just a few hours before flew into the rough winds to help the people who needed rescue. 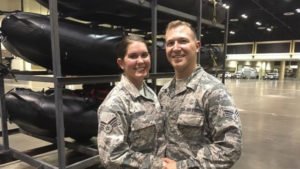 Durham and Davis met in the National Guard and that’s where their romance began. Working in the National Guard requires a lot of commitment and determination to help other people. Its this selfless attitude that prompted the couple to give up their destination ceremony for a more modest one. Â They decided that their time could be used elsewhere, such as in Florida helping the people that were affected by the super storm. 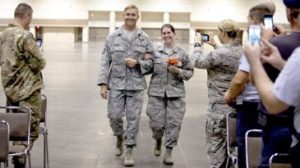 Despite all this, Durham said she was still unsure about how their guests will react when they find out that they missed the wedding completely and that the ceremony at the beach will no longer be continued. Durham said it would be a surprise for most of her guests, but they will eventually understand their impromptu decision. At the wedding ceremony at the convention center, there were still a lot of friends that attended the wedding, including longtime friends who were also in the Air National Guard. Strangers also came and help with setting up the ceremony.