Couple with 13 Sons Expecting another Child

Earlier this week, a mother who has given birth to 13 sons in a row has announced that she is expecting her 14th child. According to the expecting parents, they would love to have a girl to add to their growing brood, and maybe add a dash of pink to all the blue. But they have said that they weren’t that worried about gender, as long as the child is strong and healthy. 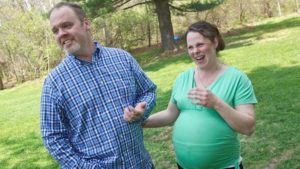 Kateri and Jay Schwandt’s 14th child is due on April, but the couple decided that they wanted to keep the baby’s sex a mystery so that they could be surprised when the baby was born. This was what they have done for the past few deliveries. 42-year old Kateri became a mother for the first time 25 years ago and her youngest child is two years old. 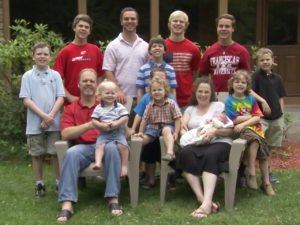 Jay, the father, says that he hopes it’s a girl but he isn’t too sure he’ll ever have a daughter after having 13 sons. According to Wolframalpha, the chances of having 13 children that are all male are one in 8,192. And the chances of having a 14th son are even more amazing at one in 16,384. The Schwandts thought that their 13th child would be their last, but they are still happy for the newest blessing. Both Jay and Kateri come from big families.

“I would love to have a girl, but I just don’t think it’s in the cards,” he said, adding that this pregnancy will probably be their last. It just feels like this is going to be it, and we’re going to enjoy every second of it,” Schwandt said.