Earlier this week, deputies in California were called in after a large pig had escaped from its pen. The pig which was described as “the size of a mini horse” was eventually lured back to its home with the use of a bag of Doritos. The video of the police officers luring the large bovine with the chips has been posted on social media, where it quickly went viral. 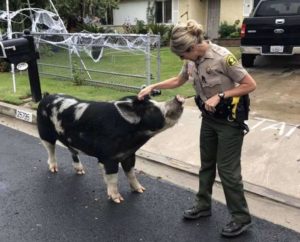 The San Bernardino County Sheriff’s Department posted a video on their official Instagram account of how they lured the large pig and their casual walk back home. According to the reports, one of the officers, had a bag of Doritos chips (flavored “Poppin Jalapenos) in her lunch bag, and they used the chips to make a trail for the pig to follow. They eventually led the pig back to its home. 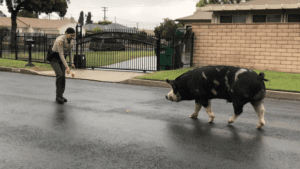 “Deputy Ponce and Deputy Berg found him and due to previous calls, knew where he lived,” the post read. According to Deputy Ponce, they were able to put him back in and secure the gate to make sure it wouldn’t escape again. She also expressed how much fun they had corralling the large pig, especially with feeding it Doritos on the long walk home.

“Crime fighting to safely securing a mini horse sized pig, we do it all,” the sheriff’s department said. The deputies nicknamed the pig “Smalls” because they were not sure of its real named. The police department also thanked social media users for taking it easy on them with the pig jokes.