In Asheville, North Carolina, the kids of a small neighborhood had setup a 50-foot homemade Slip ‘N Slide. But just as they were about to begin with the summer fun, two police officers had arrived on the scene. They thought that someone had called the cops on the structure they had made because the slide that they had made had extended all the way down the street. 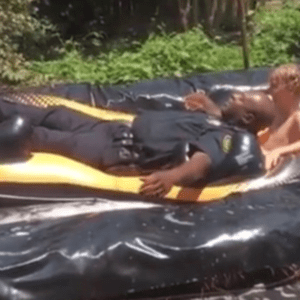 But as the police officers Carrie Lee and Joe Jones approached, they informed the gathered residents that they were not there to put a stop to all the fun. They assessed the situation and determined that the water slide could be used without endangering incoming traffic. According to the police officers, it wasn’t blocking the entire road and there was still some room for emergency vehicles to pass on the other side of the street. 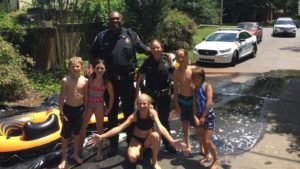 “Don’t worry, we’re not here to break up your fun,” Officer Lee told a group “We received a call about the road being blocked — so here we are.” They explained to the kids that the slide could stay and they were just checking that everyone was safe. But before the two officers left the area, Officer Lee whispered to one of the kids: “Grab me one of those plastic Glad bags.” The kids rushed to grab a bag for the officer and before they could ask him what it was for, Lee was sliding feet first down the slide. Soon after Lee, the kids had persuaded the other officer to also take a turn on the slide.

“We for sure did not expect that,” said Asheville resident Katlen Joyce Smith, “She went first in the plastic bag — and joked, ‘This is going to make such a good body-cam video.'”